Offida and its history

Offida has prehistoric origins, and is famous for its tradition of bobbin lace making (merletto a tombolo), but also for its religious monuments, the rich gastronomy and Historical Carnival.
The town is located on the site of prehistoric settlements, to which the Pelasgians followed, an ancient Middle Eastern population related to the Etruscans. In the following centuries, the italic population called Piceni were absorbed by the growing R 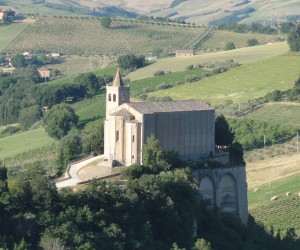 oman Empire. After their fall, their place was taken by the Lombards who made Offida a characteristic medieval town.
The famous bobbin lace art has its origins in the Middle Ages from which it was passed down from mother to daughter until the present day. The art of weaving threads with small wooden spindles (called “fuselli”) has long been a source of income for women, who made clothing, trousseaus, and furniture. Testifying the importance of this tradition, the bobbin lace art has a dedicated section within the Municipal Museum and a monument to “the lace women” at the entrance to the town centre.
In the historical town centre, there are many interesting churches in terms of architecture and art: the majestic “Collegiata”, “S. Agostino” with the relics of the miracle of the Eucharist, “l’Addolorata” (Our Lady of Sorrows), and finally the most striking and important, Santa Maria della Rocca, the recently restored eleventh century church of Gothic-Byzantine art.
Other significant buildings are the old Town Hall: it dominates the central square “Piazza del Popolo” and houses the Municipal Theatre called “Serpente Aureo”. Offida has been bestowed with the accolade of one of the “most beautiful villages in Italy.”

Many events take place in Offida during the course of the year, most significantly the Carnevale Storico (Historical Carnival). It takes place from the Thursday to the Tuesday of Carnival (Mardi Gras), and features “Lu Bov fint” (the fake bull), a bullfight through the streets of the town with a ‘human’ bull, “i vlurd”, 2 metre long burning bundles of straw reeds, “i veglionissimi”, masked balls at the “Serpente Aureo”. These are not hours of rest 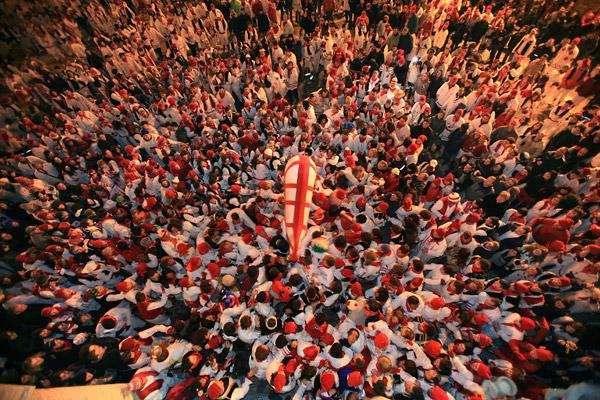 and relaxation!
On May 3, the feast of the Holy Cross celebrates the Eucharistic miracle, whose relics are preserved in the church of S. Agostino.
Every Friday, during July and August, the town’s streets come alive with a market of typical local products, collectibles, antiques, wine and gourmet products.
In the month of August you can observe the famous bobbin lace contest, called “Fusello d’oro” (Golden Spindle), together with the exposition of the artwork created during the contest and various promotional events about this art.
The first Sunday of August in the historic centre, there is a Culinary Festival called “Chichì ripieno”, a typical pizza from Offida with a distinctive flavor, stuffed with tuna, anchovies and pickles.
Very successful are the festivals of nearby villages: in mid-June the festivity of St. Barnaba;
in early July the village of Santa Maria Goretti offers the festival of macaroni and wild boar;
Borgo Miriam, in late August, is organizing the festival of a particular type of pasta known as strozzapreti with castrated pork; on August 23 we celebrate the civil and religious feast of the Blessed Bernardo, a Capuchin friar native of Offida.
In the first week of September, Vinea, the regional association of wine producers, in collaboration with the international organization Slow Food, organizes the event “Di Vino In Vino” which offers a tasting of local food and wine. Originally, this event was a celebration of the grape, now it also offers the opportunity to discover the typical products of the area, with tasting workshops led by expert sommeliers and chefs. The presence of the wine association in the town of Offida, is no coincidence due to the natural vocation of the hills to produce excellent wines that have recently earned the village three DOC recognitions: “Offida Passerina”, “Pecorino Offida” and “Rosso Offida”.

The hills surrounding Offida, with vineyards and traditions, offer a wide variety of dishes and palatable wines.
From the vineyards, facing south-east, influenced by the sea breeze, fine wines can be achieved, not all of them well known: the Rosso Piceno Superiore DOCG, the flagship of the red wine of this region, obtained with three grape varieties called Montepulciano, Sangiovese, Cabernet, grown in the area. The white wines produced in the region are “Offida Pecorino” and “Passerina Offida”, the result of the farming of two old vines now newly rediscovered. 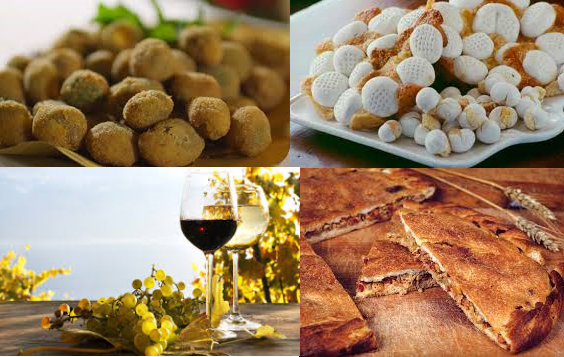 The production of olives has a great importance in the area as well. The famous “oliva tenera ascolana” (tender olive from Ascoli), preserved in brine, is essential for the preparation of the famous olive based delicacy called “Olive all’Ascolana”, an olive stuffed with beef, pork and chicken, breaded and fried. These olives accompanied by breaded lamb cutlets, fried artichokes and fried custard make up the delicious “fritto misto all’Acolana”.
The chicken “ncipp nciapp” is a typical local dish: it consists of chicken pieces browned in a pan and flavoured with garlic, rosemary and other spices.
Other local foods worthy of note such as the rabbit cooked “alla cacciatora” (rabbit stewed in a tomato, wine and herb sauce), “timballo” (lasagne), “stracciatella” (egg with chicken broth), homemade tagliatelle with a duck and tomato sauce, always whetted with excellent wines.
The proximity to the sea also offers excellent fish dishes: “brodetto alla sambenedettese” (a rich fish soup, typical of the coastal city of San Benedetto) and meat roasts usually served with Pecorino or Passerina Offida wines.
Offida is also well known for a sweet that the local bakeries sell known as ‘Funghetti’ (little mushrooms) which are made of water, sugar, flour and anise and when cooked resemble small white mushrooms and are rather delicious! 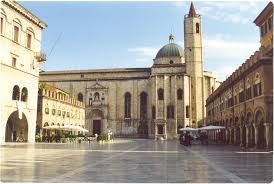 There are other small towns situated nearby, all developed during the Middle Ages. They are mostly perched on green hilltops: Ripatransone, Acquaviva, Castignano, Montalto delle Marche, Cossignano, just to name a few located within a few kilometres, also worth visiting.
Ascoli Piceno has ancient origins and was strongly influenced by the Romans, and boasted the title of “Little Rome”. It is located 180 kms from Rome and is well connected with several daily bus services.
Ascoli Piceno is a popular destination for tourists due to its numerous artistic jewels such as the famous Piazza del Popolo, the church of S. Francesco with adjoining cloister, Piazza Arringo, the Municipal Art Gallery (Pinacoteca civica), the Roman Amphitheater, the Malatesta Fortress, the theatre Ventidio Basso and the arch of Porta Romana. The recreation of the ancient jousting tournament known as the “Quintana” is held on the first Sunday in August, and is well attended by locals and tourists alike.